One of the best way to learn French is to immense yourself in the culture. French movies are a great way to do this. A fairly recent movie that I recommend that you see is the “The adventures of Tintin” based on a widely popular comic in France by cartoonist Hergé. IT follows the adventure of Tintin and his dog Snowy as they investigate unsolved mysteries.  If you are in France be sure to stop by a bookstore and check out the collection on Tintin. The Adventures of Tintin, or  as it is called in french, Les Aventures de Tintin: Le Secret de la Licorne, was adopted to the big screen in 2011, as a 3D motion capture computer-animated epic adventure film, directed by the man himself,  Steven Spielberg.

This movie I would recommend for someone who has finished level A2 of your french exam. As a result, if you are a level A2 and higher and you are interesting in improving your Comprehension Orale for you DELF, TCF or TEF exams, this movie is for you!

Check out the movie Trailer below. Do not be discourage if you do not understand everything the first time, take your time, after all that is what language learning is all about.

DELF A2 : How to describe and talk about your home in French 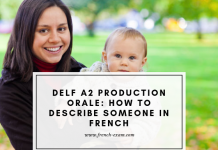 DELF A2 : How to describe and talk about your home...

DELF A2 : How to describe your hometown or neighbourhood in...